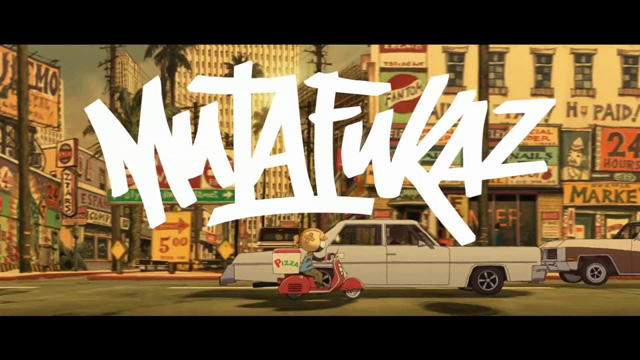 Latest Film from STUDIO4℃, MUTAFUKAZ, will be made into Desk Calendar for 2018!
The film is co-created by STUDIO4℃ and the French company Ankama. It was world premiered at the world’s largest animation film festival, Annecy Intl. Animation Film Festival 2017. Directors are Shojiro Nishimi (Character Designer and Supervising Animation Director of “Tekkonkinkreet”) and Guillaume “RUN” Renard (the author of the popular French comics (BD) “Mutafukaz”). Shinji Kimura took part as the Art Director.

The calendar includes 12 visual materials. Do not miss this chance to check out the first-out visuals of the latest film!!


©ANKAMA ANIMATIONS - 2017
*These are sample images and designs are subject to change.

Calendars will be sent out sequentially from December!

※MUTAFUKAZ Film Desk Calendar 2018 is available at FUN&-limited price through the FUN& Project Schedule. Later on, it will be available at STUDIO4℃’s web shop: Beyond Shop Global (http://studio4c.ocnk.net/) at a different price.

Angelino is just one of thousands of deadbeats living in Dark Meat City. But an otherwise unremarkable scooter accident caused by a beautiful, mysterious stranger is about to transform his life... into a waking nightmare! He starts seeing monstrous forms prowling around all over the city... Is Angelino losing his mind, or could an alien invasion really be happening this quietly...?